To celebrate this icon’s birthday, we thought it would be fun to share some fascinating facts about the Space Needle. If you’re a local or have ever visited the Space Needle, you probably already know that the Space Needle was constructed for the 1962 World’s Fair. In 1962, the fair had a space age theme, so obviously, a flying saucer needed to be incorporated into the design!

Wait, what?! About 1.3 million guests visit the Space Needle every single year, and it definitely feels like a public institution. But this beloved landmark is privately owned by the Wright family, and the 120’ x 120’ parcel that the Space Needle sits on is the only private property on the 74 acres that make up the Seattle Center.

Who is the Wright family, you may be wondering? The Howard S. Wright Construction Company was established in 1885, and this company was responsible for building several famous landmarks and buildings. (Ever heard of the Columbia Tower or the, uh… Grand Coulee Dam? Yep, that’s the Wright family.) Today, the company is called Wright Hotels Inc., and in addition to the Space Needle, the Wright family owns the Chihuly garden and Glass, Sheraton Seattle, Monterey Marriott, Semiahmoo Resort, Cedarbrook Lodge, and more. To learn even more about this family’s history and legacy, check out this great interview with Howard S. Wright III (his great-grandfather is the original founder of the company).

Fun Fact #2: The Space Needle’s design is inspired by a flying saucer (as you know), and also the feminine form.

The Space Needle’s design has a few notable sources of inspiration for its design. Like we mentioned in the intro, the World’s Fair that year had a space age-theme, so the flying saucer aspect is definitely prominent. Edward E. Carlson, the main organizer of the World’s Fair, is given credit for sketching the first design of the Space Needle on a napkin. John Graham was the architect (and is also sometimes given credit for the design), and also designed Seattle’s Northgate, which is the world’s first auto-centric shopping mall.

As for the tower shape, Architect Victor Steinbrueck drew inspiration from “The Feminine One,” an abstract sculpture by artist Don Lemon.

Fun Fact #3: The Space Needle is home to the world’s first revolving floor.

In 2018, The Loupe (aka the revolving floor) was installed in the Space Needle. Visitors can enjoy a fresh perspective from this windowed floor. The glass here is designed like reinforced concrete, and according to SpaceNeedle.com, “Each section was custom-designed with multiple redundant layers of structural glass fused together with a high-strength interlayer giving the glass composite a strength capacity up to five times the design loads used for code requirements.” The glass has been extensively tested to ensure it’s safe during strong wind, live loads, and human impact. If you’re interested in learning more about the strength and safety of the glass in the Space Needle, this info is fascinating!

Fun Fact #4: If the Space Needle were built now, it would cost about $100 million. 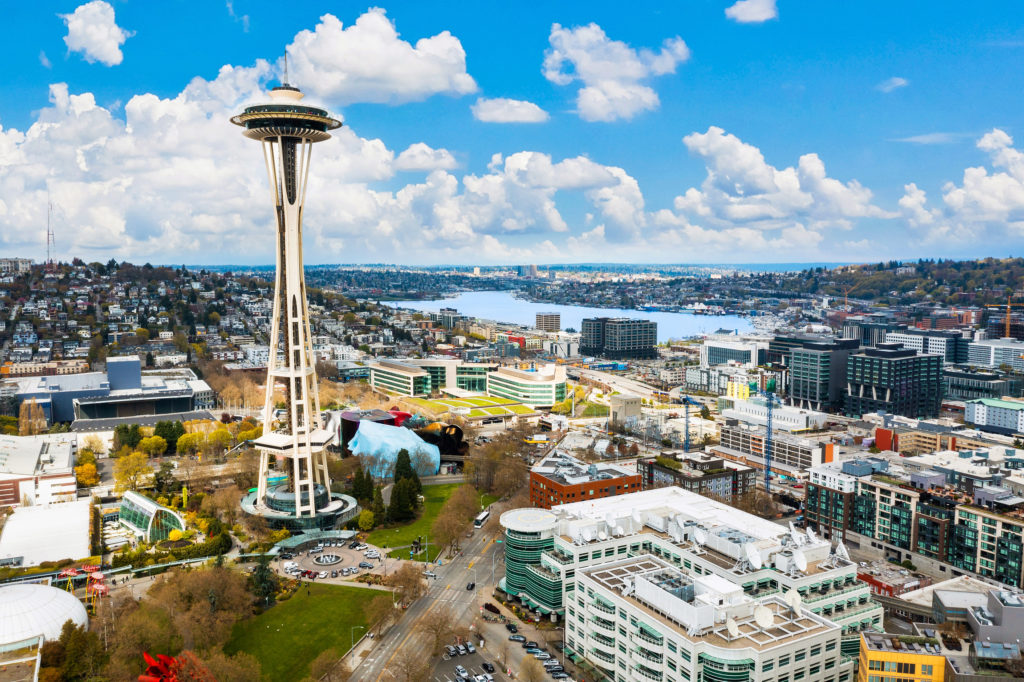 Our latest Happy Home listing in Seattle’s Belltown neighborhood has a lovely view of the Space Needle!

Fun Fact #5: The Space Needle is designed to withstand wind speeds of 200 mph and an earthquake magnitude up to 9.1.

Fun Fact #6: In 1989, the KING-TV Almost Live comedy show ran an April Fools prank that said the Space Needle had fallen over…

… And a ton of people believed it was real! Seattle’s 911 system was overwhelmed with people calling in, and the prank received international attention. You can watch the clip here:

Fun Fact #7: The Space Needle once had a mascot named… Sneedle.

Yes, we can’t make this stuff up! Apparently Sneedle was created to celebrate the Space Needle’s 35th anniversary in 1997. 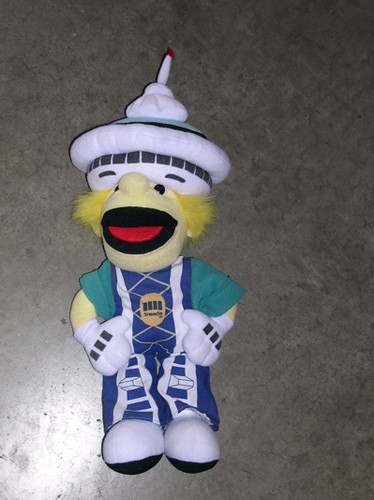 Our latest Happy Home listing shows off *classic* Frasier views of the Seattle skyline (which includes the Space Needle, of course!) and Elliott Bay.

Click here to check out this Lower Queen Anne townhouse! 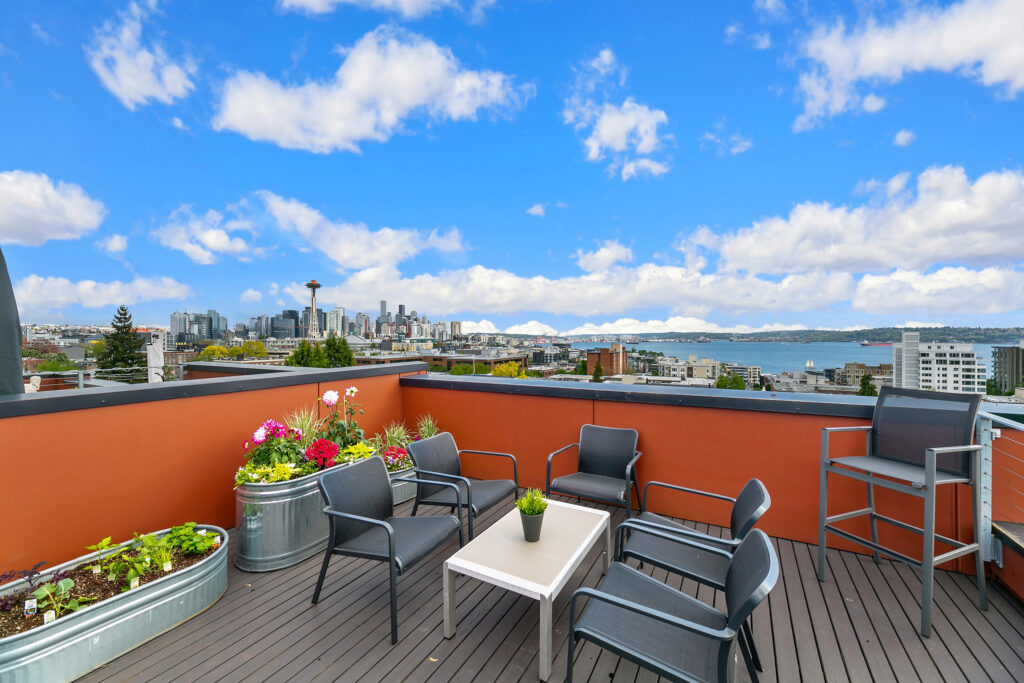 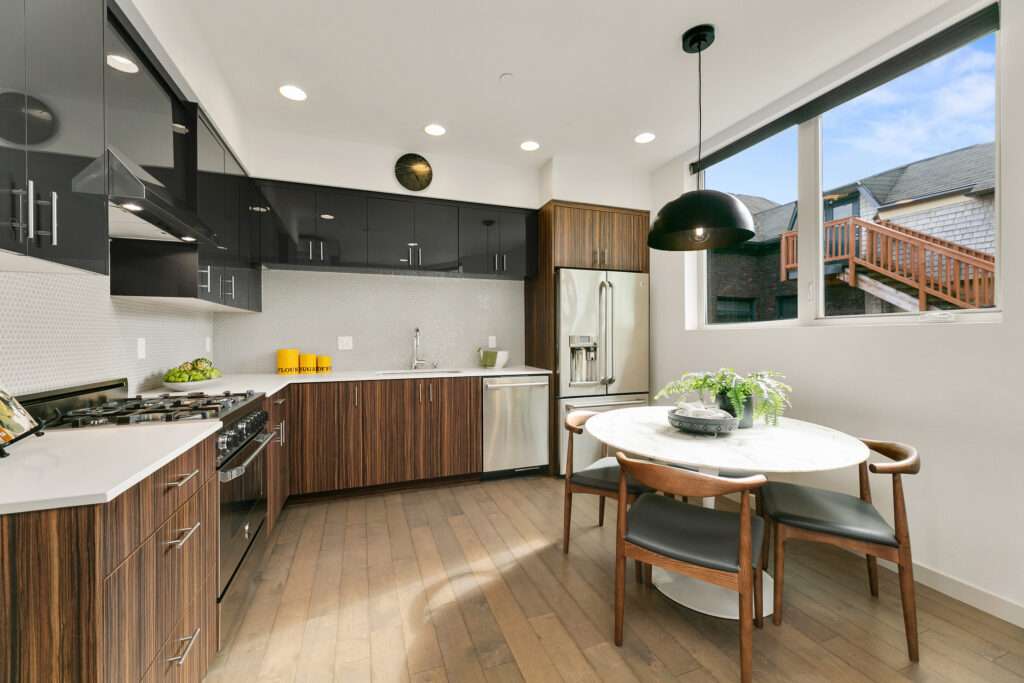 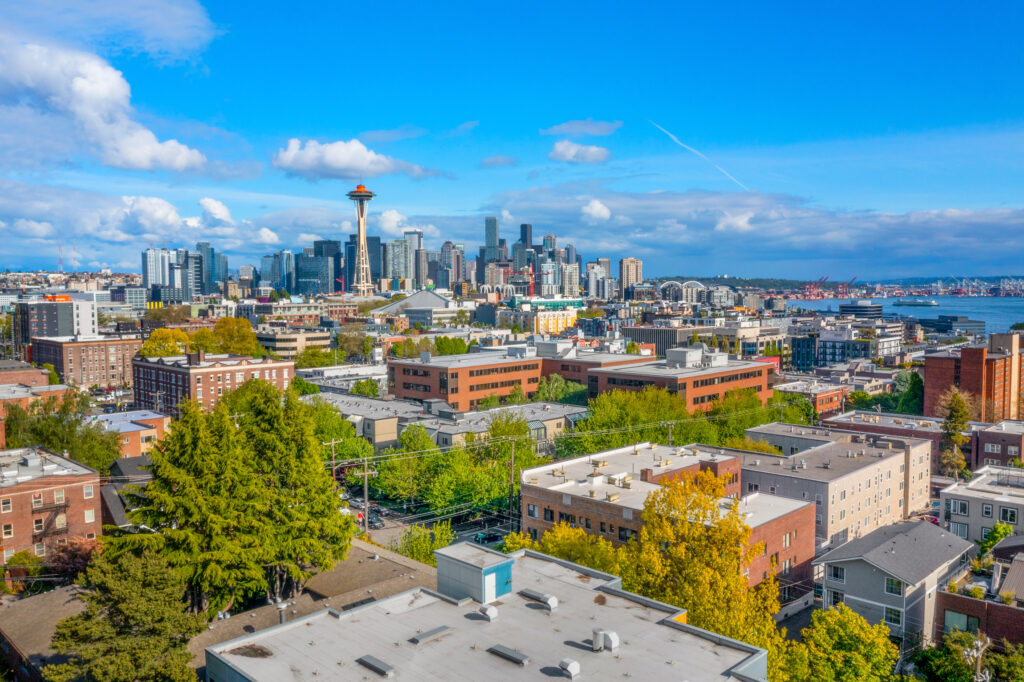